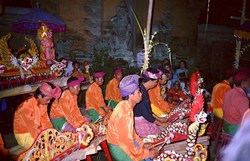 The one festival and time of the year I enjoy is the Bali Arts Festival. A potpourri of drama, dance and culture combine to make it one of the most enjoyable attractions of the year. Twenty provinces from Indonesia will join the festival this year by presenting their cultural arts and handicrafts as well as twelve arts troupe from eight countries. The international events would include a world `wayang` (puppet shadow) festival and an ASEAN ethnic music festival. The theme this year will be “Citta Wretti Nirodha” or a self-controlling behaviour toward the balance and harmony. The festival will be held in conjunction with the 100th anniversary of the National Awakening Day as well as the Visit Indonesia Year 2008. The 30th annual Bali Arts Festival will be held on June 14-July 12.