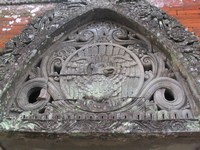 Although the predominant religion in Bali is Hindu-Dharma, Christianity has a presence on the island. There are many villages that are Christian enclaves and around the island you will find quite a few churches. Not so long ago I read about a quaint little church that is seldom visited except of course by its parishioners. In fact, you have probably driven right past it on your way to Pura Luhur Batakaru when you visited there. The main road north of Tabanan to Gunung Batakau is a scenic route passing through shrub-lined villages and rice terraces and lined with a mixture of tall trees and coconut palms. Along this stretch of road you will come to the village of Buruan where the road forks to the left leading up to Gunung Batukau. A few kilometres to the north I entered the village of Tengudak and on the right-hand side of the road is located the Catholic church of St Martins de Pons. 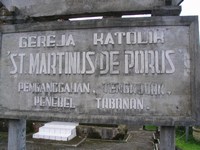 The church is an interesting example of Balinese Christian architecture and, although locked when I arrived, the facade is all I needed to see and admire. Several Christian motifs have been carved onto the typical red-brick facade. Interestingly, there is a four-tiered Hindu meru tower atop the building. The entrance doors are beautifully carved with biblical scenes and portray various characters. I found the windows to be of an unusual nature with beautifully and ornate window coverings. I will be returning to this church is a few months as I would like to see the inside as it reminds me of many of the small village churches in England except they don’t have merus!. 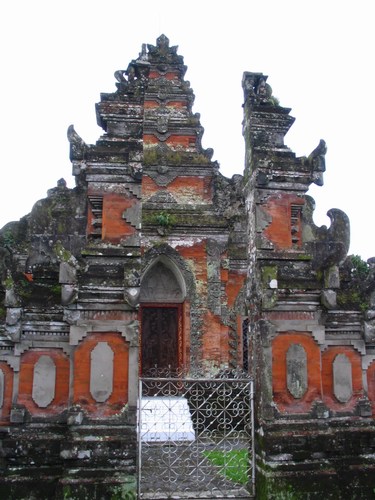