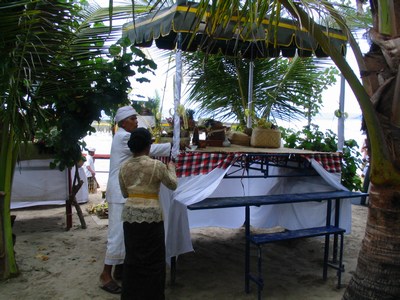 Bali is renowned as being the island of the Gods. There are countless ceremonies at whatever time you visit the island throughout the year and you will have many opportunities to see religious ceremonies; at temples, in house compounds and even on the streets. Being in Bali lets you experience the endless series of offerings, purification, processions and dozens of other religious rites that Balinese devote their lives to.

Balinese culture revolves around Agama Hindu, the local version of Hinduism. The highlights of this culturally religious observance are the upacara (ceremonies) that are colourful and frequent. The most important ones are Galungan, Kuningan, Tumpek and Nyepi to name a few.

There are those ceremonies that a majority of travellers to Bali are unaware of. Here are just a few.

Bersih Desa: This ‘ritual’ is an expression of appreciation to the fertility Gods such as Dewi Sri. Subsequently, this ritual takes place around the period of the rice harvest. I suppose you could call it a ‘village spring-clean’! Roads and paths in the village area are repaired. Houses and other buildings of importance are cleaned, as are most of the garden areas within the village. Whatever needs painting gets painted, and in general, the whole village is renewed in appearance.

Hari Raya Sariswati: Batari Dewi Saraswati, the beautiful goddess, was the wife of Brahma. She was the goddess of the arts, sciences and learning. This day is to commemorate her and nobody on the island is allowed to write or read for the day. Special ceremonies are conducted by a pedanda early in the morning at the Pura Jagatnatha temple in Denpasar. On this day, books are offered to be blessed by the Gods. Hari Raya Saraswati is a day of appreciation when wisdom was brought to the world by the Gods.

Pagerwesi: Literally interpreted means ‘iron fence’. It is a day when man should fortify the space around himself to fend off evil spirits – the continuous battle between good and evil. Pagerwesi is a day of offerings requesting spiritual strength when confronting the life-cycles of suffering and worldly fulfillment. It is also a day of offerings for the protection of the village and families and the world around them. On this day, villagers take offerings to cemeteries for the un-cremated dead. As on the day Galungan, on the day of Pagerwesi ‘penjors’ are raised which makes it a day as almost as important as Galungan. You will find this ceremony almost strictly observed in the regency of Buleleng – the northern regions of Bali.

Melasti: The day before Nyepi. Everybody knows that the day of Nyepi is a day of silence, but, the day of Melasti is far from that and especially at night. It is a day when the villagers purify the deities – known as ‘Pratima’ – with water. This is the day when the villagers, dressed in their finery and carrying long-poled umbrellas, proceed in lines towards a source of water – a holy spring or the sea. In this procession, the women carry offerings of fruit and sweet cakes and flowers, and the men carry the sacred family statues on bamboo litters. Upon arriving at the water source (generally the sea), the pedanda prays and rings his small bells whilst the men carrying the litters rush the sacred figures into the water symbolically washing them and thus purifying the statues.

On the day of Melasti, you will also find the offerings of the flesh of domestic animals at crossroads – the haven of the evil spirits ‘bhuta‘ and ‘kala’. The offering of flesh is to placate these demons. Later in the evening, all hell breaks loose with all manner of noise and din created to awaken all the evil spirits and demons. This is the most spectacular part of this day.

There is also another very important ceremony called Eka Dasa Rudra. It is a ceremony to restore balance in the world and, is the most important and biggest religious ceremony on the island of Bali. 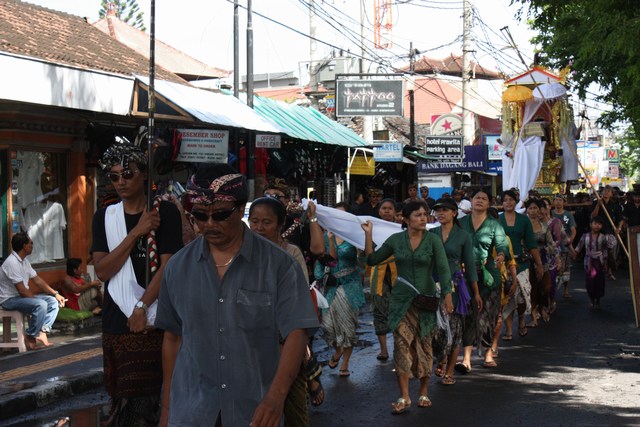