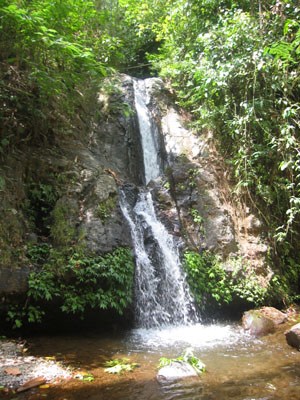 There is so much natural beauty to see in Bali that is at times overwhelming. One of the nicest to visit is one of the many waterfalls on the island; the most popular being Gitgit Falls in the north of the island. Rivers flow best during and immediately after the wet season, meaning November to April. During this time you can expect waterfalls to be spectacular and the pools at the bottom to be at their deepest. You can also expect more debris including rocks and the occasional log to come over the waterfall.

Wet season means cloudy days in the highlands. Bathing in a waterfall during the wet season may not feel like tropical paradise at first as the cold water can be quite a shock. During the dry season the weather is better, sunny and dry. However water flow is way less and pools will be shallow.

Be warned that waterfalls are sharp drops along the course of a river. You will often have to hike up or down a river for a certain way to get to a waterfall, but the river provides a route for you to follow depending on its location. There are so many waterfalls across the island but here are a few of the best.

Gitgit: The most visited waterfall in Bali, these waterfalls are located around 10 kilometres south of Singaraja and a two and a half hour drive from Kuta. Gitgit is easy to find as it is well sign-posted and popular due to its location on the main road. The hardest thing about seeing this waterfall is the 500 metres of steps going down to the falls.

Yeh Mempeh: Located 30 kilometres east of Singaraja and about four hours from Kuta. This waterfall is close to the village of Les on the north-east coast of Bali. If you are coming from Amed it is roughly the same distance. From Singaraja drive east along the north coast towards Bondalem and Tejakula. About 5km after you pass the turn off for the mountain road at Bondalem, there is a sign indicating the waterfall at the village of Les. It is a 20 minute hike on an obvious path leading you to the waterfall.

Tegenungan: This waterfall is located at the village of Kemenuh, about seven kilometres south-west of Gianyar. It is about an hour’s drive from Kuta. There are 2 ways to get to the waterfall. Go about a half kilometre west from Blahbatuh, then turn south at the next junction. Look out for a sign for the Waterfall Restaurant. This way will put you on the same side of the steep river valley as the waterfall.

The best view is from the other bank, which can be accessed by driving a kilometre west from Blahbatuh towards Kemenuh village. Signs indicate the direction of the waterfall. If lost ask a local. A small local road allows cars and motorbikes to drive up to the top of the valley overlooking the waterfall. Allow five minutes to hike down.

Blahmantung: This waterfall is close to Pupuan, the largest town in the west highlands of Bali and a two hour drive from Kuta via Tabanan. To the south of Pupuan you’ll see sign advertising the ‘Tourist Object’. Look out also for the sign saying ‘Bend Sabah Hulu‘. The access is a steep rutted path, which drops, leading you through forest down to the waterfall. Its a 30 minute walk, although a trail bike can do it fast. Regular car and motorbike access are not possible, especially in wet conditions.

Sing Sing: The waterfall is located one kilometre west of Lovina. From Kuta the distance is about three and a half hours. If you take Jl. Singsing 1km south to the waterfall, you will see a warung and a parking area. The 1st in a set of 2 waterfalls is 200 metres down a path after the warung. Keep going after that for the second, larger set.

Kuning: A nice waterfall located near the town of Bangli, an hour and a half from Kuta. Coming from Kuta head to Sanur, Gianyar, Bangli. Three kilometres before Bangli is a right hand turn which will take you in the direction of a village called Kuning. Ask locals for directions to the waterfall (air terjun) once you get to Kuning, it is another 1.5 kilometres to the waterfall. The road continually narrows to a dirt path and then it is a 20 minute hike.

Jukukmanis: The waterfall is near Medewi in West Bali. Six kilometres before Medewi is the Yeh Lebah river estuary. It’s quite wide and as soon as you can see it on your left, look out for a right hand turn heading inland. The first village you will pass through is Swastika. Carry on for a further 10 kilometres until Juwukmanis (sweet orange). There are 2 waterfalls located on either side of the road. Once in the village, head for the village pavilion and you’ll find 2 tracks leading to the waterfalls. A steep 30 minute hike will get you to the waterfall.

Mekarsari: This is located south of Bedugul in the highlands. At Mekarsari a small white signpost on the main road saying ‘Waterfall 1,500m‘ will be visible. Follow the sign to the village of Kerobokan until you reach a path leading to the view and waterfall.

Munduk: The waterfall is close to Lake Tamblingan in the highlands. From Kuta follow the same route as for Mekasari, heading towards Singaraja. After you pass Lake Bratan, take the sharp left turn around to the right passing Lake Buyan and Lake Tamblingan. There is a solitary road sign indicating the location of the waterfall. You should pass the Ngiring- Ngewedang restaurant on your right and the waterfall is one kilometre further also on the right.