Turds, Drains and Other Crazy Things 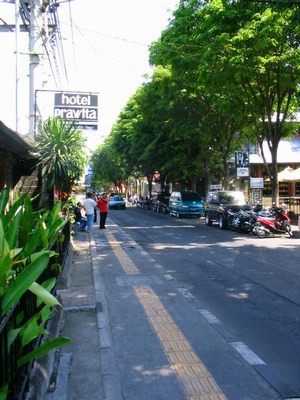 Yesterday was a great day in all manner of speaking. It was warm, the rain had dissipated and, it was just a bloody damn nice day! After being energised with a healthy serving of fresh fruit and a banana pancake Candika and I decided a laid-back meander up to Seminyak was the order for the morning. After all, it’s only a few miles…oops…kilometres (still can’t get used to this metric system) and besides, what nicer way to walk off a few unwanted additions to the anatomy. A few new places had opened and it seemed to me that every available space, no matter how small, was turned into a warung or chic café. Jalan Legian was relatively quiet as it generally is at 8am and the tourists were few and far between.

But, it is the little things you suddenly become aware of and once you notice it the first time, it seems to multiply like some alien from outer space. Everybody loves dogs. Right? But it’s what they leave behind after a moment’s meditation that is disgusting. That’s correct folks, I’m talking about dog shit and not your usual droplets but turds the size of rats. It was in front of the Bali Monument that I assisted Candika in halting the relining of the soles of her shoes and bugga me if we didn’t see another pile up ahead right there on the footpath. It was bizarre and even more so as we walked further along. I’ll give it to these Bali dogs, they have excellent bowels! Seriously though, this does seem to be a problem and one that I had never noticed before. So watch where you are walking or you will slip and slide on matter you really don’t want to.

I realise the rain does play havoc with thin bitumen and potholes are appearing in the roads again, that’s right, again. Motorists are being put through a kind of survival course along Jalan Legian but you have to admire the Balinese shop owners. They kindly put pot plants in the holes so that the motorists can be guide on their journey. How thoughtful! But it’s not only the roads that have been hit hard by the recent deluges. The lovely yellow strip down the centre of the footpath has now felt the vengeance of Mother Nature and several sections have collapsed causing problems for the unaware tourist who is too busy window-gazing as they merrily stroll along. Actually, the collapsed sections reminded me of the old days when the open-air drains were hazardous for pedestrians. I like the yellow strip, some people don’t as they consider it slippy, but I sure do miss the old drains!

After our morning hike, we relaxed at the Kopi Pot on Jalan Legian for an iced Latte and the thought occurred to me that I was in need of a new pair of sandals. I don’t just like any sandal. I am a great lover of Tevas from the USA. In Australia you could pay as much as AUD$150 and more in any of the outdoor shops but here in Bali because they don’t pay high taxes of goods, they are cheap. Four years ago I bought a pair in the Matahari Dept store in Kuta Square for Rp250,000 and they are still going strong but I wanted a new pair. Last year it was the elusive search for the sandal but I did hear on the grapevine here that I could buy them at the Sports Station in the Centro Discovery in Tuban. Don’t know where that is?. It’s the bloody big white building you see as you come from the airport! Time for a reckie and check out to see if the truth of the grapevine will offer up success.

I left Candika to peruse the ladies clothing section telling her we would meet up later at Bali Colada Restoran, that was, after I parted with a few hundred thousand Rupiah. Why is it women never seem to have enough money in their purses when it comes to shopping? Anyway, Candika went one way, cash in hand, and I the other with a weeping wallet. The grapevine was correct and as I always do when I shop for anything, I get the job done and get out of there (not like females who spend hours). I had a conversation with my weeping wallet and had enough to purchase a pair of cool-looking Teva sandals for a mere Rp400,000. At the exchange rate of Rp7,450 to the Oz dollar I figured I just got a good deal. One more task though, find an ATM and get some money to pay for lunch!