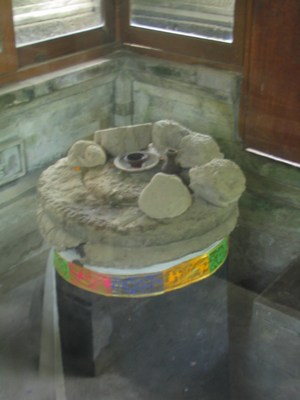 I received an email yesterday from a person who will be travelling to Bali next month and staying in Sanur. Apparently she had read in an old guidebook about an antiquity called Prasati Blanjong. She told me there was hardly any information about it or where to find it but she wanted to see it. The stone pillar of Prasasti Blanjong is one of the oldest man-made objects in Bali dates back to 913AD. It is the writing on the pillar that is most unusual. The language used on the pillar is most likely old Javanese (kawi), and it tells the story of a king who came from Java, in order to set up a Mahayana Buddhist government. Prasasti Blanjong is the site of one of the oldest man-made objects in Bali.

The site of the temple and small shrine in which you will find this archaeological treasure is located on Jl. Danau Poso in Sanur down a small gang virtually across the road from a Circle K. Ask any taxi driver and he will know the place. When you reach the temple and after negotiating a few steps, you will find a small room at the rear of the temple where the glass enclosed stone pillar sat. The middle section of the pillar is wrapped in cloth. The glass casing was built in the 60’s as a form of preservation of the two metre tall stone pillar.

When I searched out this elusive antiquity quite a few years back I must admit I was a tad disappointed but also thrilled that I could view such an ancient treasure of Bali. If you are going to see Prasasti Blanjong, entrance is free but please wear a sarong and sash out of respect.