The Many Forms of Balinese Dance 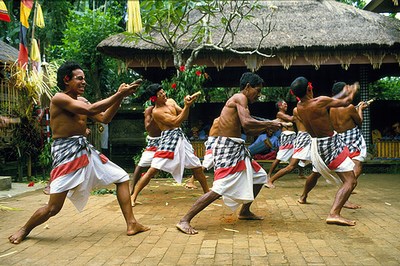 Birthdays, weddings, and temples festivals are all occasions for dramatic performances and dance. Bali dancers learn the craft as children from their mothers as young as the age of ten. In Balinese dance the movement is closely associated with the rhythms produced by the gamelan, a musical ensemble specific to Java and Bali. Multiple levels of articulations in the face, eyes, hands, arms, hips, and feet are coordinated to reflect layers of percussive sounds.

Naturally, the performances for tourists that are on offer for tourists are of a commercial basis compared to those performed with a religious significance like in a Balinese temple. However, the dances are a stunning feature for all visitors to Bali to not miss on their visit to the island.

Kecak: This is the best known of the traditional Balinese dances and does not feature the gamelan. A male choir provides the accompaniment. The dance itself is expresses mythological aspects local traditions and the Hindu Ramayana poem. The dance tells the story of how King Rama was persecuted by the ogre king, Rahwana, forms an alliance with the monkey people of the forest to overcome his enemy. Dances last an hour and feature about a hundred dancers.

Barong & Rangda: The Barong dance is the Balinese version of a Chinese lion dance and is very popular with tourists. It is a battle of good versus evil and the lion character (Barong) represents good and is up against the widow witch (Rangda). There are two guys who work the lion character and get very animated.

The Barong dances in tightly wound around Balinese superstition and culture and is performed during religious ceremonies as well as for tourists. Central to its theme is the fight between the king of the forest and the forces of evil. The musical accompaniment is a gamelan orchestra with metal xylophones creating a rhythmic effect.

Kris Dance: This dance comes at the end of the Barong dance and is almost like another dance entirely. Basically the followers of Barong have been overtaken by evil spirits and have entered a trance state. The evil Rangda taunts them and they attempt to stab themselves with their krises (traditional wavy knives) until the good Barong steps in to stop them. The magical trance state is supposed to protect them from injury.

Legong: The most viewed by tourists as a number of 5 star hotels actually have performances in the grounds of the hotel. The Legong dance is very graceful and the dancers are usually young girls, often not even in their teens.

Topeng: This dance has sacred significance to Balinese and only those who behave respectfully will be allowed to watch. This dance is accompanied by a gamelan orchestra and involves dancers wearing masks, imitating the character represented by the mask. These dances are often performed at ceremonies and processions. The particular rhythms followed by the different dancers are related to the age of their characters.

Sanghyang (Fire Dance): The Fire dance has a variety of forms but the basic idea is that it is done to drive out the evil spirits from the village. The dancers are in a trance state and a priest brings them out of it at the end. One version of this is the Sanghyang Jaran where a boy dances through and around a fire riding a sacred toy horse. Another is the Sanghyang Dedari where a couple of young girls dance gracefully, eyes closed.

There are other dance forms worthy of note and just as interesting to see on your visit to Bali. They are the Baris, Kebyar, Barong Landung, Janger, Jauk and the Pendet which is a daily dance performed at temples before offerings are made.

One theatrical performance definitely worth seeing is the Ramayana Ballet. This dance follows a similar story to the Kecak dance and tells of Rama and Sita with a gamelan orchestra.