The Importance of Marga 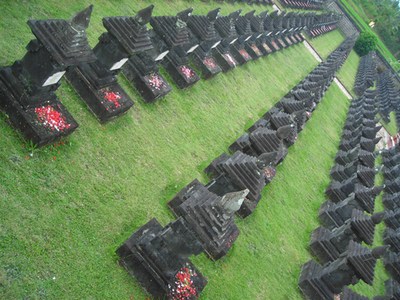 Located 25 klms from Denpasar, Marga is an out-of-the-way place that is definitely worth a visit for its importance in Balinese history. There is an area called Margarana north-west of Marga which is now a cemetery for the 1,372 men and women killed during the fighting in the struggle against the Dutch. There are 1,372 small memorial stones, all eerily placed in a precise formation. Their religions were Christian, Muslim and Balinist.

It was in Margarana where 29 year-old Lt.Col. I Gusti Ngurah Rai, and 94 soldiers committed ‘Puputan’, a fight to the death, against an overwhelming force of Dutch troops and fighter planes. In a large compound stands the monument to the freedom fighters and there are 94 small stupa-shaped headstones in their memory. The nearby museum is an interest also as it houses artifacts from the struggle, old photos and the ilk.