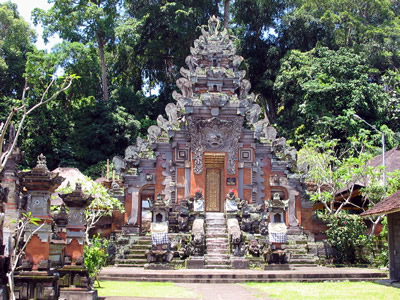 There are several Pura located north of Blahbatuh and near the village of Sema Buang you will find this temple. The temple holds one of the finest odalan (celebration of the temple’s founding) in the area. Pura Kedarman is diagonally opposite a smaller Pura in the village of Kutri.

This is an intriguing temple, and once you enter the lower level through the Candi Bentar, or entrance gateway, there are several pavilions and an interesting array of smaller statues whose actual dating the pendeta was unaware. At the rear, you will notice a very steep and slippy stone stairway leading up through a Banyan tree forest.

This stairway leads to a sanctuary up on the hill. It is the sanctuary on the top of the hill that is the treasure of this temple. A statue of King Airlagga’s mother Gunapriadarmapatni Mahendradatta, can be found in a small shelter. The statue is in the shape of a six-arm goddess of death, a Durga, slaying a bull possessed by a demon, It is interesting to note the surrounding flames carved into the statue, and the ‘weapons’ of supernatural powers. Those being a shield and spear, bow and arrows, and a flaming circular object believed to be a disc. Mahendradatta ruled in Bali until 1006 AD. Either side of the statue of Mahendradatta, there are Linga’s, several small flat stones with faded inscriptions, and a small statue of Ganesha.

Academics and archaeologists alike have come to the conclusion that Mahendradatta could possibly have been the original with queen Rangda. It is further agreed that she [the queen] was cremated in a ceremony on the top of the hill. There is a tomb at Gunung Kawi dedicated to Rangda and it is assumed that her ashes were removed from the hill and placed there.