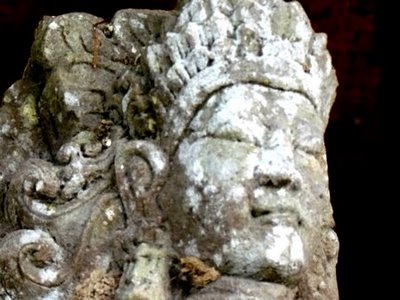 Located in the village of Blahbatuh some 10 kilometres west of the town of Gianyar, the temple is the most southern antiquity of the ancient Pejeng Kingdom. At present the exterior of the temple is getting a much needed facelift although the interior will remain the same. Pura Gaduh was actually destroyed by an earthquake in 1917 and it was rebuilt and restored.

The interior of the temple is structured the same as all Balinese Pura except for the rather fanciful carvings which can be seen on the main stairway inside the Candi Bentar.

The remarkable antiquity of this Pura is the massive stone head-portrait of Kebo Iwo. It dates from the 14th C, however it is strangely afar from the Hindu/Javanese icons structured during this period. Kebo Iwo served as a minister to the last Balinese king, Bedulu, who was a despot by nature and had the head of a boar. During the Majapahit invasion in 1343 AD, the King of the Bedulu Kingdom was defeated by Gadjah Mada.