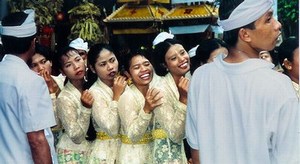 Today is Saraswati in Bali. This is the special day of thanks for the gift of knowledge. The festive day is a time for making offerings to books and especially the sacred lontar palm leaf books. All books are subjects on this day. One is not supposed to read books, however schools have special ceremonies. Notedly, Pura Jagatnatha in Denpasar is jam packed with students praying for success in their studies in the early morning ceremony.

Here is a brief description of the Goddess Saraswati:

Saraswati is the Goddess of leaming, knowledge, and wisdom. The Sanskrit word sara means “essence” and swa means “self.” Thus Saraswati means “the essence of the self.” Saraswati is represented in Hindu mythology as the divine consort of Lord Brahma, the Creator of the universe. Since knowledge is necessary for creation, Saraswati symbolizes the creative power of Brahma. Goddess Saraswati is worshipped by all persons interested in knowledge, especially students, teachers, scholars, and scientists.

In Her popular images and pictures, Goddess Saraswati is generally depicted with four arms (some pictures may show only two arms), wearing a white sari and seated on a white lotus. She holds a book and a rosary in her rear two hands, while the front two hands are engaged in the playing of a lute (veena). Her right leg is shown slightly pushing against her left leg. She uses a swan as her vehicle. There is a peacock by her side gazing at her. This symbolism illustrates the following spiritual ideas:

The four arms denote her omnipresence and omnipotence. The two front arms indicate her activity in the physical world and the two back arms signify her presence in the spiritual world. The four hands represent the four elements of the inner personality. The mind (manas) is represented by the front right hand, the intellect (buddhi) by the front left hand, the conditioned consciousness (chitta) by the rear left hand, and the ego (ahankara) by the rear right hand.

The left side of the body symbolizes the qualities of the heart and the right side symbolizes activities of the mind and intellect. A book in the rear left hand signifies that knowledge acquired must be used with love and kindness to promote prosperity of mankind.

The rosary signifies concentration, meditation, and contemplation, leading to samadhi, or union with God. A rosary in the rear right hand representing ego conveys that true knowledge acquired with love and devotion melts the ego and results in liberation (moksha) of the seeker from the bondage to the physical world.

The Goddess is shown playing a musical instrument that is held in her front hands, which denote mind and intellect. This symbol conveys that the seeker must tune his mind and intellect in order to live in perfect harmony with the world. Such harmonious living enables the individual to utilize acquired knowledge for the welfare of all mankind.

Two swans are depicted on the left side of the Goddess. A swan is said to have a sensitive beak that enables it to distinguish pure milk from a mixture of milk and water. A swan, therefore, symbolizes the power of discrimination, or the ability to discriminate between right and wrong or good and bad. Saraswati uses the swan as her carrier. This indicates that one must acquire and apply knowledge with discrimination for the good of mankind. Knowledge that is dominated by ego can destroy the world.

A peacock is sitting next to Saraswati and is anxiously waiting to serve as her vehicle. A peacock depicts unpredictable behaviour as its moods can be influenced by the changes in the weather. Saraswati is using a swan as a vehicle and not the peacock. This signifies that one should overcome fear, indecision, and fickleness in order to acquire true knowledge.