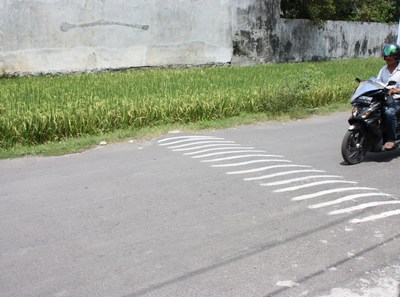 After decades of travelling around the archipelago of Indonesia I have come across many odd things, both culturally and linguistically. Being well versed in Bahasa Indonesia, I was delightfully surprised to hear, when I was in Yogyakarta, a term unfamiliar to me. The term being ‘Polisi Tidur’

I have probably heard it before a thousand times but not payed much notice to it. Literally translated it means ‘sleeping policeman’. What it actually applies to is the speed bumps in the road! Of course I fond this amusing but when you think about it, it makes sense. They slow the traffic down just as if a policeman was standing there.

How I learnt about this term was because there is a polisi tidur at the entrance to the village where I stayed and many of the locals mentioned it at times in conversation. Naturally, my curiosity became the better of me and I asked one of the locals. With much hilarity he explained it. Actually it is quite a cute term as a deterrent for speeding motorists, both motor bikes and cars.