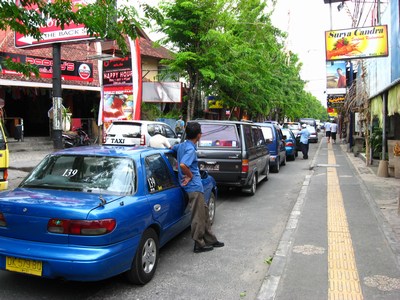 I don’t know about you but I reckon this year has flown by as has the decade. Anyway, it’s big-time party time again and the tourist strip will be absolute mayhem with New Year’s Eve reveller’s bringing in the coming year. Bars, nightclubs and the ilk, in fact wherever alcohol is served, will be overflowing with party people.

The biggest headache (and not the hangover the following morning) will be getting from place to place. If you have a set idea where you want to go then that is good, however, those who know the notoriety of Jalan Legian when it gets busy (foto left), will avoid using any form of transport; even your own vehicle if you have hired one. The best thing to do is walk from place to place, for some, stagger is more appropriate. Be careful of the traffic and look after each other.

Certain roads will be closed in the Kuta and Legian area from 5:00 pm on December 31, 2009 until 6:00 am on January 1, 2010. If Jalan Legian is closed off to traffic then it will be one big street party! However, unruly behaviour can be seen by the numerous new CCTV surveillance cameras recently installed. The police will be everywhere and although their demeanour will be tolerant, don’t push your luck.

In the light of the recent drug arrest of an Australian man, be careful because there will undercover cops everywhere. Most importantly, females should avoid walking alone. There are those elements on the island who unfortunately take advantage of a single female and especially if the lady has had a few drinks.

Lastly, go out and ENJOY! Happy New Years Eve to one and all.