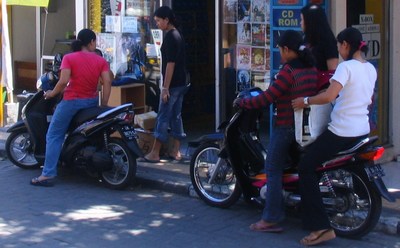 In the Balinese media over the last few days much has been written about the instigation of a program by the Balinese Government regarding road safety and now, the Indonesian Government has implemented really strong penalties for motorbike riders with new laws that came into effect of the 1st April.

I have ridden a motorbike and driven a car in most of the major towns throughout the archipelago but when it comes to riding or driving in Bali, I flatly refuse. It is absolute mayhem. On the roads I have seen some crazy antics by motorbike riders, and a majority of them were westerners, recklessly showing off or riding carelessly; doing stupid things. It’s not only themselves they put in danger but those of other road users.

If you are heading to Bali and intend renting a motorbike then you should be aware that the police will be coming down hard on everyone who flouts these new laws. Riding a motorbike here in Bali just isn’t the same as in your home country. To give you an idea of what the new laws are and the penalties involved, here is a list together with the fines imposed courtesy of this week’s Kuta Weekly:

Not wearing a certified helmet while operating a motorcycle: Rp250,000

Failing to concentrate on driving by doing another activity (eg. Using a handphone):
Rp750,000

Turning or changing lanes without using a turn signal: Rp250,000

These are just a few! Perhaps these laws are long overdue considering the amount of unnecessary accidents that occur on a daily basis in Bali. The last few days I have seen a few police roadblocks with the police busy pulling over numerous offenders. 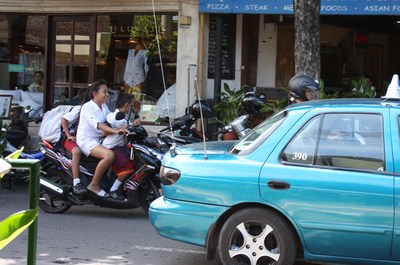 This morning, as Candika and I were having breakfast, we had an excellent view of Jalan Legian and the traffic flowing along it. As the morning progressed, we estimated that a good third of westerners on motorbikes were flouting the new laws. I suppose they have money to burn, so to speak. A lot of the locals were just as bad riding without helmets and racing down the street.

Just be aware of these new rules when visiting Bali and adhere to them or you will find your holiday money dwindling fast.