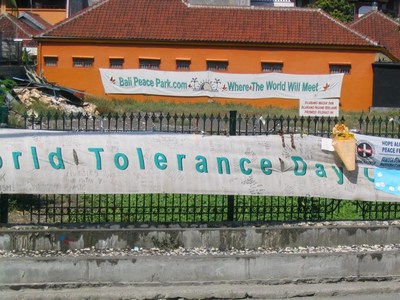 As I settled down with a cuppa last night to watch the evening news, I was even more disgusted to watch the report that I had read about in the morning paper – a new nightclub is being planned for the sacred Sari Club bomb site and an application to build a nightclub and restaurant complex on the land has already been lodged with the relevant planning authorities. Disgusting and sacrilegious as this is in the minds of westerners, and especially those who lost loved ones on that fateful night, unfortunately it seems our words of protest will fall on deaf ears or even worse, be laughed at. The differences and attitudes between our culture and that of the Balinese, and in fact the rest of Indonesia, are vast regarding loved ones who have passed away.

The man who holds the lease over the land, Kadek Wiranatha, is resolute in his plan and unmoved regardless of protests and objections from the organisers of the Bali Peace Park and that of the Prime Minister of Australia, Kevin Rudd. According to the report in the Sydney Morning Herald, Mr Wiranatha has told the Australian organisers behind the Bali Peace Park of his plans, rebuffing their pleas to meet them and hear of their idea for a garden of remembrance on the site.

The Sari Club where many Australians lost their lives in the terrorist attack on the Kuta tourist strip in Bali in 2002 is a sacred site in many people’s eyes and not just those of Australians. Kevin Rudd was quoted as saying ”When it comes to the future of that site, we shouldn’t have anything which allows people to trample on the memories of those who tragically lost their lives in Bali,”

The idea proposed by the Bali Peace Park Group has always been the best idea for that site. They wanted to buy or lease the land and hand it over to a trust run by Balinese, who would manage the garden. This concept itself is perfect. It would not only be a place for paying tribute and a place of prayer and solitude for the relatives of loved ones who lost their lives that night, it would also be a place for international travellers and tourists to pay their respects when they visited Bali.

Let me know what you think of this proposed nightclub being erected on the Sari site.