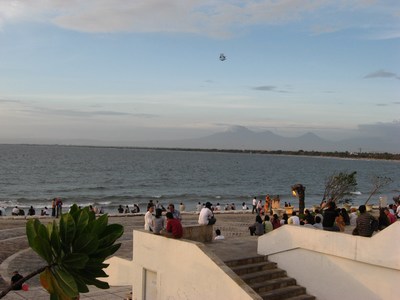 It appears the Bali Government is putting in 100% and more in an effort to ensure the security of tourists visiting the island of Bali. Not only has the security been increased in the tourist areas, but greater screening of travellers coming from Java has been enforced at the port of Gilamanuk in West Bali also. Now, the Bali Government is going one step further and assigning each of the island’s 723 village’s police officers to thwart terrorism and secrete information according to an article I read in the Bali Discovery. This is an excellent idea and is one way of investigating the goings-on around the island and if strange faces begin to appear in these villages or strange things happening. It will also give the villagers themselves a boost of confidence and have them participating in this crazy struggle against terrorism.

One advance in thwarting these bearers of evil is the increased surveillance of shops selling chemicals in order to prevent any possible misuse of those materials. This is something that should have been instigated after the initial bombings in 2002. The primary importance is that the Bali Government is going all-out to ensure the safety of visitors to the island and for that I applaud them.