Monuments On the Chopping Block in Bali? 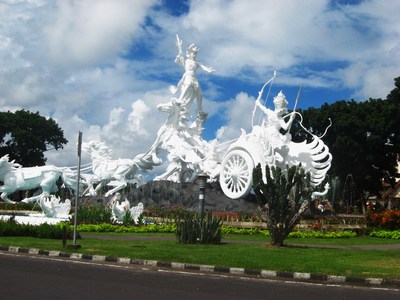 I have seen and photographed literally thousands of statues and monuments on my travels over the decades, and, a heck of a lot in Indonesia. I enjoy looking at the statues and monuments that grace roundabouts, crossroads and other various positions in the towns and villages throughout Bali. But, experts in the Balinese Government say it may be time to move or remove some of Bali’s monumental landmarks.

When I read the article in the Bali Discovery newsletter it kind of made sense considering the traffic congestion that now exists on the island. There are talks, apparently of building flyovers to ease this situation; an idea that doesn’t really enthuse me as I have see these flyovers in the bigger cities in Java and they look ugly.

According to the article: During the reign of Suwenda as mayor of Denpasar, the construction of hero monuments at the Ubung and Nangka intersections were ordered. This was followed by the construction of the dragon statue in downtown Denpasar at “Simpang Enam” and the Dewa Ruci monument at “Simpang Siur.” There are other statues, including a nursing mother monument near the Sanglah General Hospital.

All these statues were erected to help beatify the city. But now, with traffic jams affecting many areas of Denpasar and south Bali, these same statues are seen as impeding traffic flows. With plans now afoot to build flyovers to ease traffic flows at busy intersections, gardens and monuments may be downsized or removed.

What’s your opinion of the monuments and statues being moved or removed entirely?