Inside a Balinese Temple 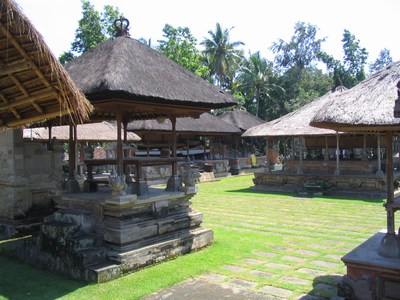 Visiting a temple, particularly one that is a having a ceremony, or a special dance performance, is one of the special aspects of visiting Bali. Balinese temple design is a fascinating subject in its own right. Everything from the layout, to the structures to the decoration has a specific function. Locally geography often determines the actually shape of a temple and no two temples are exactly the same. There are however certain key elements that you will find in most temples.

Just as a Balinese family compound will be built on the kaja-kelod axis, so too are Balinese temples. Larger temples have 3 courtyards, smaller ones just 2. The entrance to a Balinese temple at the kelod (pointing away from Gunung Agung) end of the compound, is often a simple gate.

Here are some of the interesting buildings you will find in a Balinese temple:

Bale – An all purpose pavilion used for meetings.

Bale Gong – This is the gamelan pavilion where the orchestra plays and instruments are stored.

Kulkul – A bell tower with a split-log hanging in the center. Used to summon people.

Taksu – A stone pillar which is the seat of the interpreter to the gods. During certain trance dances this interpreter will occupy the body of the dancer.

Meru Gunung Batur – A shrine dedicated to Mt. Batur. Has from 1-9 thatched roofs.

Padmasana – The Lotus Throne, seat of Sanghyang Widi Wasa, the Supreme Deity. Always located in the kaja-kangin corner of the courtyard, which is the closest point to Gunung Agung. Also identifiable because the whole structure sits on the back of a giant cosmic turtle, the Bedawang.

Gedong Pesimpangan – Shrine in honor of the founder of the village.

Gedong Paruman – A pavilion structure in the center of the inner courtyard, left empty so the gods can assemble for ceremonies.