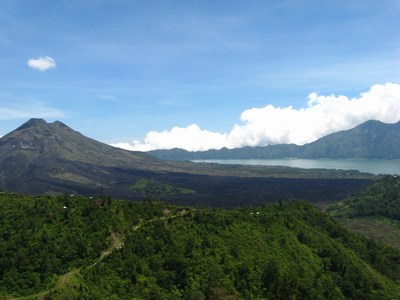 As most travellers to Bali know, Gunung Batur and the crater-lake Danau Batur are the stunning views you are afforded when you visit Kintamani. I was reading an article today that the active volcano has now been designated for a possible eruption with its status raised from normal to alert. I recalled on my last visit there recently a conversation I had with one of the locals. He told me, “When the water in the lake starts getting warmer, then this is not good”

Gunung Batur last erupted as early as nine years ago and it is not surprising the seismic activity has increased considering that there have been so many eruptions throughout the archipelago of late. Bali has had its fair share of minor quakes but has remained relatively unscathed from a natural disaster. It is only understandable then that hiking up the mountain is not allowed at this time.

I certainly hope a devastating eruption does not occur because the whole area around the lake is a pure delight to travellers with such interesting places as Penelokan, the Bali Aga village of Trunyan as well as numerous sacred temples.