Five Things to Do in Denpasar 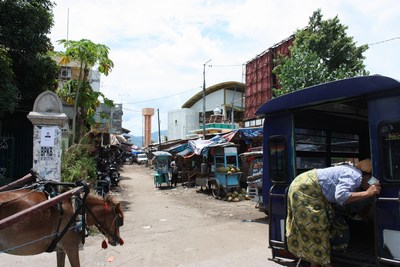 The capital of Bali ever since it gained independence from the Dutch, Denpasar is a bustling and energetic city but, you either love it, or, you hate it. It’s that kind of city. Denpasar literally means ‘by the market’ and is Bali’s only real city. A lot of people don’t like Denpasar but I find it a fascinating and historical place to walk around, wander through the traditional markets, chat with the locals and imbibe in some food at one of the hundreds of warungs that can be found in this amazing city.

Jl Teuku Umar is renowned for eateries ranging from simple warungs to restorans. It’s not only this street in Denpasar, there are a plethora of warungs and restorans as well as the kaki lima that ply their wares along the smaller streets and gangs across this beautiful city. The Badung River is in the centre of downtown Denpasar. The eastern districts of Denpasar are less enticing but, the art gallery at the Taman Budaya Cultural Centre is worth a look. The suburb of Renon is chiefly of interest for its numerous consulates.

Puputan Square: This would have to be the centre of attraction in Denpasar with its large, shady trees and open space, so named after a tragic battle occurred there in 1906 between the Dutch forces and the ruling classes in Bali. Thousands of people died in this conflict. On the weekends it becomes especially busy with the locals enjoying the atmosphere and imbibing in a game of chess of which there are many wooden tables for its players to challenge each other. It is also a place for lovers, friends and for a meeting place being the centre and easiest accessible place in the city.

Bali Museum: Located opposite Puputan Square. Set in traditional looking grounds, adjacent to Pura Jagatnata, a visit to the museum is a relaxing and affordable place. Here you can learn about Balinese history in detail. Split into 4 main buildings, the museum is stocked with artifacts dating back to the megalithic period. The museum dates back to 1910. The structure was in the puri-pura style, meaning like a palace-temple, complete with courtyards, pavilions and decorated temple gateways.

The Main Building contains a stone sarcophagus dating from 600BC-800AD as well as ancient tools used by the early Balinese. There are also weapons used by the Balinese against the Dutch. The Buleleng Pavilion contains examples of Balinese fibre arts, including a loom and various cloth; endek, songket and the famous Geringsing.
The Karangasem Pavilion has among other things examples of the Balinese Wuku calendar, a complex guide for priests to figure out auspicious days for weddings, funerals and other ceremonies. The Tabanan Pavilion has items used in Balinese music and dance, including a Barong costume and 2 massive Barong Landung costumes.

Pura Agung Jagatnatha: Built in 1953 and adjoining the museum this is a state temple and is dedicated to the supreme god, Sanghyang Widi Wasa, the supreme of divine gatherings. The name Jagatnatha derives its origin from the Sanskrit word jagat meaning world. Two festivals based on lunar cycles are celebrated here every month. During the days of full moon and new moon, visiting this temple during these times can be a memorable experience. No matter what time you visit this magnificent temple you will always find devotees in prayer.

Pasar Burung: This is a smaller scale open-air market located on Jl. Veteran, north on Alun-alun Puputan. This market does not sell food or sarongs, but specializes in live animals, particularly live birds. No doubt the conditions of the market are not up to western standards, but one has to put this kind of thing aside for the moment in order to check out the place. Tropical birds of all kinds can be found there.

Pasar Badung: This is the largest market in Bali and one of the most interesting. Fruit and vegetable producers from around Bali may bring their goods to this market and subsequently the market is buzzing continuously. Around the ground floor areas of Pasar Badung, especially outside the stairwells, one can observe older Balinese ladies preparing and selling traditional Balinese snack foods. The lower floors of the market are reserved for meat, fish, fruit and veg. The upper floors are for spices and traditional Balinese and Muslim attire. Also sold are Balinese ceremonial equipment such as umbrellas and baskets. One hint – get there early in the morning because the later the morning becomes, the hotter and busier it is.