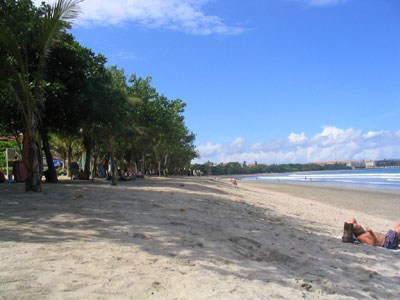 Picture this: A long pan-flat, white sandy beach seemingly stretching as far as the eye could see and, the upper shore lined with palm trees; their fronds swaying in the gentle ocean breeze. Ocean waves rippled along the shoreline bathing in the warmth of the sun. Virtually deserted except for a few locals going along with their own business the beach was idyllic; almost surreal. Reads like the epitome of paradise and a place people yearn to be. This was my very first look at Kuta Beach but, that was one heck of a long time ago. And now, there is severe beach erosion of several stretches of the coastline.

Many factors have been attributed to this erosion and they include severe storms of recent years but there are those who say it is just neglect. The once world-renowned white sands of Kuta Beach are a dull grey and even though a popular destination for lovers of stunning sunsets, the beach has attained a certain odour from rotting seaweed and garbage. However, the Balinese Government has been industrious in solving this problem with regular beach clean-ups but, it is the eroding shoreline that is the massive problem. 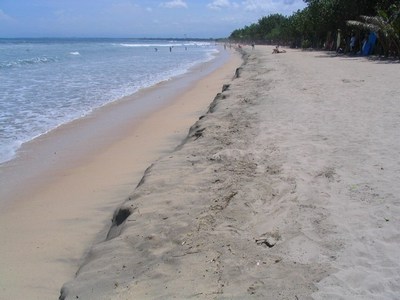 At one time you could virtually stroll to the waterline but now it is that close to the seawall that is almost impossible to find a place to sit. The banks of high sand that were becoming prevalent in the last year or so, have now increased in size making it a trap for the unsuspecting tourist.

An article recently in the Bali Discovery noted: The investment of substantial sums in recent years to reclaim and protect Kuta’s shoreline has done little to prevent severe erosion in the last days of October 2009. A major stretch of Kuta has lost 15 meters of beach depth along a stretch 200 meters long. It has also affected the beachfront near the Discovery Kartika Plaza Hotel and the Discovery Shopping Mall.

So what is the answer? Of course you could dump humungous amounts of sand and fill-in the eroding beach but, then that would cause the waves on the shoreline to retreat faster and endanger the users of the beach. Only time will tell and only mother nature can repair this problem.