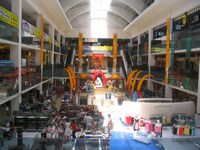 After a 10 year absence from Bali having had these years in Yogyakarta, Central Java, I returned in 2003 to see many changes had occurred on the island of Bali. One place that particularly took my attention was the near completion of the Discovery Mall on Jalan Kartika Plaza. At that time I can recall mentioning to my wife as we passed on our way from the airport that the white edifice would be a ‘white elephant’. How wrong was I in my statement. Of course every year I have returned to Bali since 2003 and over the years I have seen the Discovery Mall evolving into one of the best shopping complexes on the island. There are not many tourists to the island that dislike the place as it offers an excellent choice of restaurants, coffee shops and stores, but also affords spectacular ocean views from the rear of the building. Little by little over the years a new shop or restaurant has been added, another bank installed in the complex making it a delightful place to spend a few hours, or in some cases with over-enthusiastic shoppers, a whole day.

When I returned earlier this year for a two month sojourn I was pleasantly surprised to see the old supermarket in the basement had given way to the Sogo department store (which my wife adores much to the angst of my wallet) and not only that, both sides of the Mall have opened up making the complex, well, massive. What is even better is the plans [already underway] to create a Food Court on the top floor and we did enjoy a meal at one of the new places there. But without a doubt, my favourite way to wile the hours away is having a meal at Bali Colada as the sun sets slowly into the ocean, and after, sipping a nice iced-coffee at the nearby Black Canyon Restaurant.

I have no doubt that the Discovery Mall will continue to offer tourist and travellers to the island the best that there is to offer, however, I wish they would stop moving the toilets on the ground floor!. A little tip for you. If you want to spend a penny then head up to the second floor as the toilets are much cleaner, and, they don’t get moved.