Be Careful With Your Money in Bali 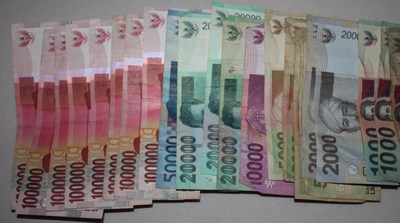 Being here in Bali I get to see some unfortunate issues regarding money and these generally concern those who are visiting the island for the first time. It’s the simple things you need to be aware of so that you don’t get ripped off or even worse, robbed.

Let’s get this clear, it’s NOT the Balinese but others who come to this island to make money and, do it anyway they can. If that means ripping off tourists then they will do that without feeling guilty whatsoever. The first thing anyone who has visited Bali on a regular basis will tell you is DON’T flash your money in public. It immediately draws attention from the wrong quarter.

The first example I will explain concerns a husband and wife sitting in a warung we were at. By their mannerisms and what they talked about (they had loud voices) it was obvious it was their first visit to Bali:

A hawker entered the warung selling bottles of muscle relaxant. He immediately approached the couple and began his spiel. They were unsure and the hawker continued but started massaging the woman’s shoulders with the liquid whilst a stunned husband looked on.

The husband, obviously wanting the hawker to get his hands off his wife, asked how much for a bottle. They looked at each other and then the woman opened her handbag on her lap and began counting money out. Whilst she was doing this the hawker was checking out the contents of her bag as well as the amount of money she had.

Solution: Firstly, never buy that snake oil! Secondly, opening a handbag in close proximity to people you don’t know so they get a good view of the contents only gives them the impetus to rip you off with a ridiculous price for the product. Also, if you were to have a few million Rupiah, a cellphone and even your passport and other valuables, then it makes you a target for a possible bag snatch.

The second example is a real concern. It is a case of being unaware of the currency before you come to Bali:

Candika and I were strolling through a market and noticed two ladies in their ageing years. They wanted to buy a couple of sarongs. The vendor gave them the price. One of the ladies then opened her purse and took out a wad of mixed notes and said “Do I have enough money?”

Solution: Orientate yourself with the Indonesia Rupiah, the value of each respective note and its value in regard to your currency with the exchange rate. NEVER hand over your money to anyone you don’t know in the hope they will be kind to you and assist you. Again, the Balinese would, but others wouldn’t.

Note: In both cases I approached the people concerned and explained to them the simple mistakes they had made. They were understanding and grateful. Both times it was over a cup of coffee!

The above are only a couple of examples. I have seen many more over the years. Basically, be aware that there are people out there more than willing to alleviate you of your money and valuables.

Bali IS a safe place, Just be aware!