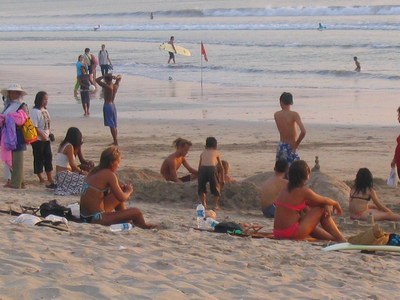 I can recall back in the late 80’s and 90’s when the amount of tourists inundating Bali became too overwhelming. It seems to be happening now with cheap flights to Bali from Australia and other regions in South-east Asia and for Australian tourists, the exchange rates for the Oz dollar has made an even better reason to visit Bali.

In the last two decades of the last century there was a growing concern as to the point whether or not the tiny island could sustain such a dramatic impact on the environment. Although, up until now, it appears to maintain a manner of status quo there is one big factor causing concern now; water. Can the water table sustain such an influx of tourists? Without building desalination plants somewhere on the island the answer is ‘No’.

And now, according to the article I read in the Bali Discovery, the Governor of Bali wants to double foreign tourist arrivals in four years. This would be great for the Balinese but what concerns me is the amount of land being chewed-up to build hotels and resorts, the drain on water resources and other environmental impacts.

As the article states: Bali’s visionary governor I Made Mangku Pastika remains confident that foreign tourist arrivals will continue to grow, reaching 5 million visitors by 2015. If achieved, this would be a more than 100% increase from the 2.3-2.4 million foreign visitors projected for all of 2010.

Will this prove disastrous for the idyllic island or will Bali become another statistic in global tourist destruction. Let me know what you think.