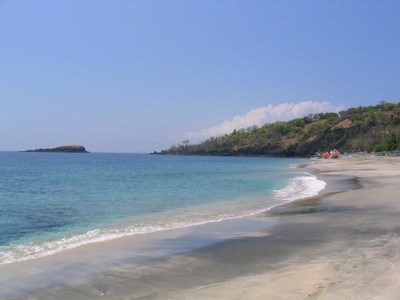 Travelling around Bali can be an enlightening experience and there are times when you come across places that you find delightful as well as surprising. Then, you probably start to wonder if any other traveller has been there before you and if you should share your treasured find with friends and other travellers to Bali. I tend to keep the many places I have found over the decades to myself but occasionally share them with select folk who have similar interests. Knowing that if you open your mouth, it won’t be long and that special place becomes touristified and spoilt. It is inevitable that eventually every track, every corner and every little village in Bali will find itself on the tourist routes. Here are five of the lesser known places I have come across on my travels. 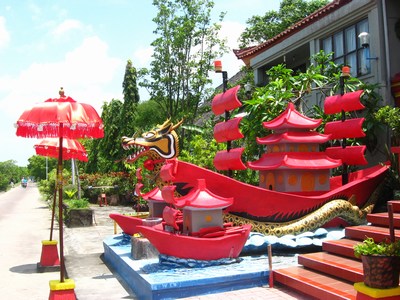 A stunning Chinese temple, it has the full name of Klenteng Ong Tay Jen Griya Kong Co Dwipayana. This unpretentious and beautiful klenteng is located on the edge of the Badung Strait. It’s not an easy place to find being so isolated, however, if you travel along Jl By Pass Simpang Siur in Tanah Kilap until you see a large sign BPPT, then directly after the sign there is a narrow dirt road that meanders through the edge of the mangrove swamps. Follow this road right down to the sea. This interesting klenteng has three dharma – Taoist, Confucianist and Bhuddist. In one pavilion there are statues of dewa dewi. This is where the Taoists pray. The Confucianists pray to NABI Khong Hu Cu in one of the several pavilions whilst the Bhuddists pray to Bhudda Gautama and the Goddess of Mercy. 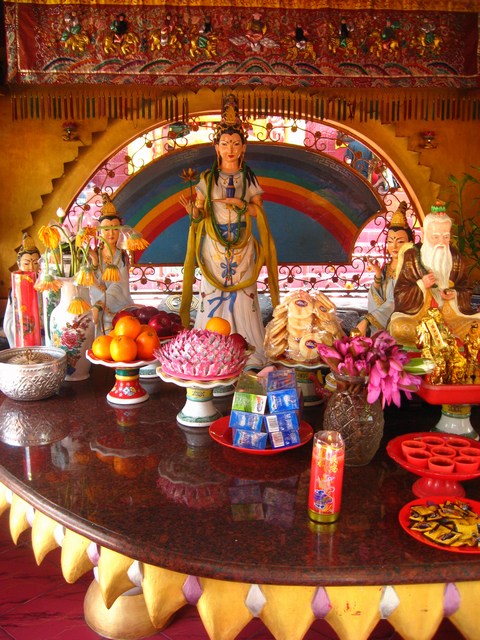 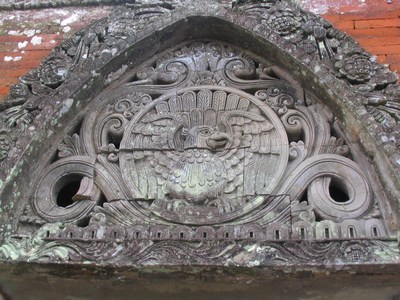 On the road to Gunung Batakau as you enter the village of Tengkudak, on the right-hand side of the road is located the Catholic church of St Martins de Pons. The church is an interesting example of Balinese Christian architecture and, although locked when I arrived, the facade is all I needed to see and admire. Several Christian motifs have been carved onto the typical red-brick facade. Interestingly, there is a four-tiered Hindu meru tower atop the building. The entrance doors are beautifully carved with biblical scenes and portray various characters. I found the windows to be of an unusual nature with beautifully and ornate window coverings. 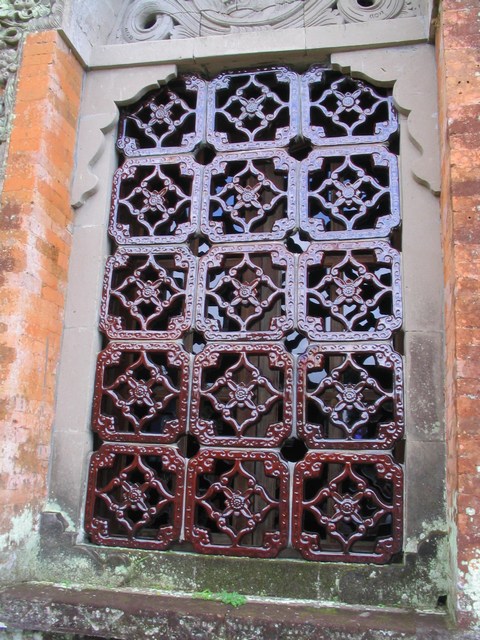 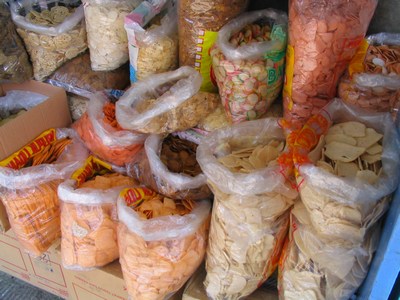 Singaraja is in the regency seat of Buleleng and is often referred to as Lion City. Located on the north coast just east of Lovina, Singaraja was once the capital of Bali under Dutch colonial administration. It is a city of charm with its wide, tree-lined streets and Dutch colonial architecture present every where you look. Singaraja Central Market is located right in the centre of the city on the main street, this poky and dusty market is fabulous to meander through albeit a tad claustrophobiatic at times. The market is seldom visited by westerners so be aware of pilfering but it is a place where you an also get some great shopping and cheaper than in Kuta! It is a general goods market meaning it has just about everything. 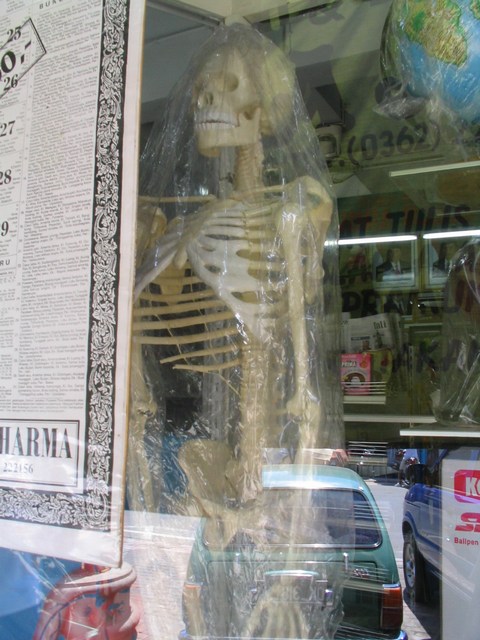 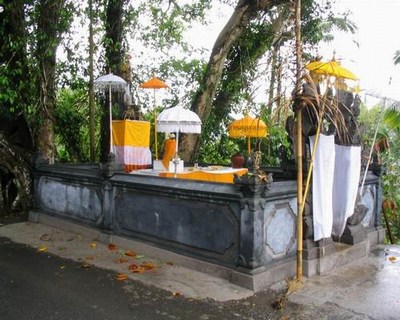 If you head west to the small town of Pekutulan and from there take the northern road to Pupuan high up in the mountain peaks, the journey will take you through rice paddies and villages, and the further you climb, you enter into the spice growing areas of Bali. Rivers flow through overlapping valleys. The road is forever winding and narrow, a switchback of horrors, and yet around every sharp bend is a surprise.

You will be taken aback when suddenly up in front of you there will be a massive tree seemingly blocking the road. Pull over to the side of the road and walk further ahead to get a closer look at this giant. The road actually goes through the tree. I recognised the tree the time I first saw it. It was a kind of Ficus, a Bolong tree that grow prolifically in the valleys.

There is a shrine on the side of the road. Do peer over the edge behind the shrine the sheer drop to the valley floor below make yourself dizzy. According to the Balinese animistic belief, a tree cannot be cut down or even scarred in any way before asking permission of the Gods and the tree itself. The locals told me once the Pedanda’s had completed their prayers, a hole was dug into the tree – not bored like we do in western countries. It then became a sacred site and daily offerings are given to the tree and to appease the Gods. 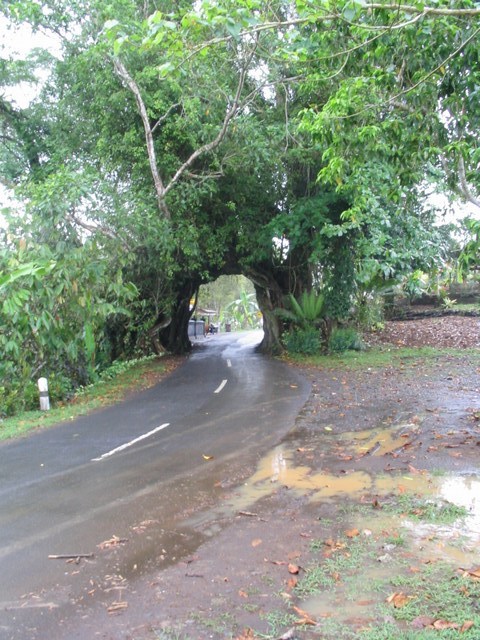 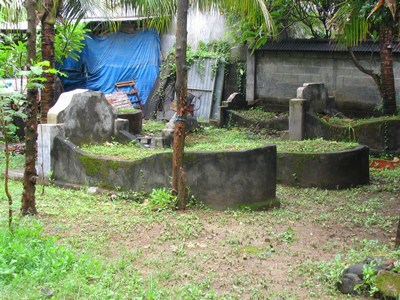 Mads Lange was the first European to set himself up in south Bali. He single-handedly put south Bali on the trading route and helped prevent Dutch rule for a period of time.Lange enjoyed great business success in Bali and his 2 main activities were trading in rice and acting as a middle man for local Balinese produce from all over the island. Products he dealt with, as well as rice include coconuts, tobacco, coffee and cattle. His ‘ace in the hole’ was he paid locals in kepeng and set the exchange rate himself.

During this time he lived in a family compound with his wives and many other companions. The street close to the night market in Kuta is called Jl.Tuan Langa after him and it is here you will find the grave site.

One of the highlights for Lange was his appointment by the Dutch to the post of official agent for the Dutch East Indies government in 1844. His personal contacts which included the higher ranks of Balinese society and his trading connections meant he was in a great position. However his new role was tricky because the Dutch were invading the north of Bali and had a naval blockage on the south. 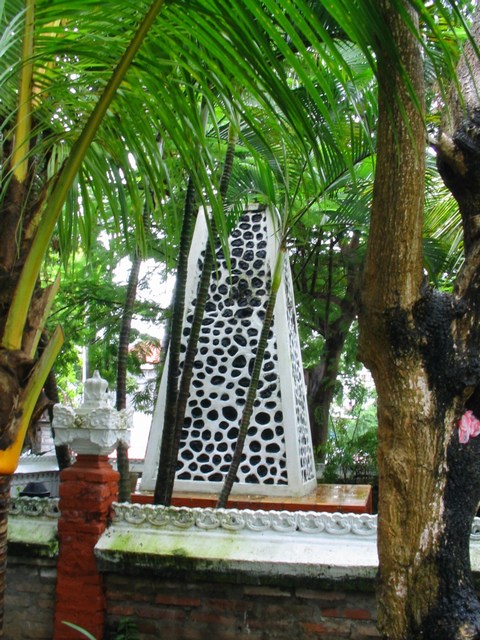