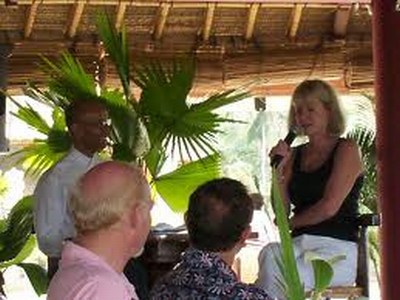 One of the best events on the island of Bali is less than a week away. Burgeoning writers, published writers and those who are just lovers of literature get your gear together and head to Ubud for the 2010 Citibank-Ubud Writers & Readers Festival. Since its beginning I have only managed to attend one of these great festivals and believe me it is well worth the visit. This year there will be 135 writers from 27 countries.

The creator of the Ubud Writers & Readers Festival is Janet de Neefe. Who founded two restaurants (Casa Luna and Indus) in Ubud as well as the famous Casa Luna Cooking School. Janet has lived in Bali for more than 20 years. The theme of this year’s Festival is ‘Bhinneka Tunngal Ika: Harmony in Diversity’ – the Indonesian national motto originating from the Sutasoma, advocating respect between all people, across religious, ethnic and social differences.

The Festival is an annual-ongoing event, held each October, in a month that commemorates the first Bali bombing. Now in its seventh year, the Festival promises to become the largest and most prestigious literary gathering in the South-East Asian region and is recognised as being one of the most important artistic and cultural festivals in Indonesia.

What I like about the festival is that is has so much to offer. There is a wide range of writing related workshops for adults such as travel writing, writing for the media, editing and publishing, memoir writing, short story writing and novel writing.