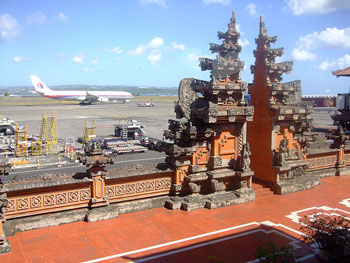 In case you haven’t been here yet, you might be under the impression that this popular island paradise has a huge airport and incoming flights from around the world, but that’s not really the case. Finding cheap flights into Bali can often be challenging as a result.

When you get here you’ll see that it’s a simple airport and probably much more basic than you were expecting. The runways and such are impressive, but the buildings and facilities remind you that this really is a small island, regardless of its popularity.

When you first get started you are probably in for a bit of confusion. The airport itself is officially called Ngurah Rai International Airport but it’s more commonly known as Denpasar International Airport, for the capital of the island, Denpasar, which isn’t far from the airport. If you begin typing B-A-L-I into an airfare search engine, it probably won’t even know what you are after. The airport code is DPS, so just type that and you’ll be set.

There are definitely a handful of “discount airlines” who fly daily into Bali, but the way the aviation industry works these days that doesn’t mean those will have the best fares. Most of these so-called discount airlines are listed on the same airfare search engines anyway, so the best thing to do is put in your dates and see what comes up.

Still, here are the ones you should be aware of, and where they fly into Bali from.

You can see by the list above that unless you are in Australia, you are probably going to have to change planes somewhere in Asia if you want a cheap flight here. Fortunately, most of the airfare search engines can now put together an itinerary using different airlines that have the lowest total cost. So, for example, you might fly on American Airlines from Los Angeles to Hong Kong, and then on Hong Kong Express (or even Cathay Pacific) to Bali, without even having to check your baggage in again.

In case you happen to be traveling around Asia, or even on a round the world trip, you may be curious which is your best city from which to get to Bali cheapest. Well, it’s not always in this order, but when a good promotional fare is around then Kuala Lumpur can be the cheapest, with fares starting around US$138 each way.

Here’s the list in order from cheapest to most expensive: